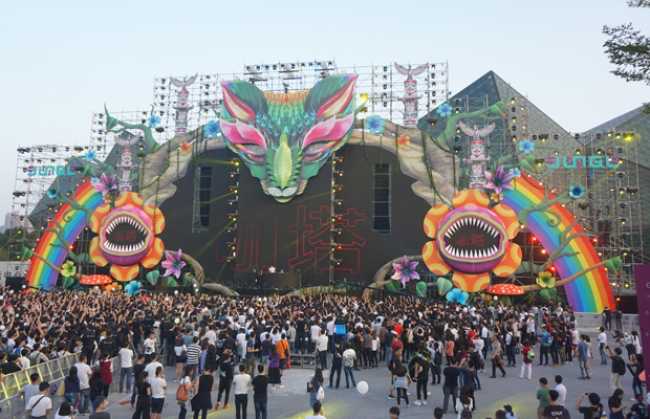 CHINA: For the second year in a row, Guangzhou Haona Audio Equipment Co Ltd (Haona) supplied the audio equipment for the Electronic Jungle Music Festival at Shenzhen Universiade Centre. The festival, which featured sets from jungle artists such as R3HAB, Knife Party and Adventure Club, was presented by Jungle Events and organised by MNET Media.

‘We were responsible for the whole sound system, including both the big stage and the smaller one,’ recalled Haona president Kong Qinghua. ‘The general contractor for lighting and sound, Music Trick Lighting (MTL), asked us to take on the project because our equipment is suitable for the show and we also provide strong technical support.’

A L-Acoustics loudspeaker system comprising 24 K1 units that were complemented by 24 K1SB subwoofers for the lows was deployed on the big stage. Joining these were eight Kudo cabinets, six KS28, 16 SB28 and a pair of SB18s, as well as six Kara. For stage monitors, six 115XT HiQ were installed, while eight LA48a and 24 LA12X 4-channel amplifiers with DSP powered the system alongside six of Outline’s X8 8-channel amplifiers with DSP. Control was via a DiGiCo SD9 console. Six Outline GTO C-12 line source arrays provided coverage for the VIP area.

The small stage was served by 12 Outline GTO loudspeakers and six GTO-Subs, which were amplified by a pair of X8 and 12 T11 units. Completing the setup were two L-Acoustics SB18, a pair of 115XT HiQ monitors and two LA12X amplified controllers.

‘L-Acoustics and Outline are well recognised in the electronic music industry,’ explained Huang Zhenan, Haona’s managing director. Mr Kong added: ‘They have a very strict training regime in place for their dealers and distributors, which provides consistent and standardised technical support in each country, which is a big benefit in guaranteeing the effect of the show.’

Not only did the festival expand in duration for this edition (from one day to two), it also increased in size with the addition of the second stage and a relocation to a larger venue. This resulted in additional challenges for the Haona team.

‘There were small hills with trees at the venue and the organisers added a VIP section,’ said Mr Kong. ‘We needed to calculate the coverage accurately before the show and take all of these factors into consideration. There were also some adjustments made onsite and we had only two days for setup and alignment.’

‘The equipment needs to be able to work for eight consecutive hours, from 2pm to 10pm, with full power energy and at a very high SPL,’ added Mr Huang. ‘These are harsh conditions for the products. Concerts or touring shows, for example, last two to three hours and nightclubs operate for four to five hours. We needed to prepare more headroom when we designed the system and were confident that we did not need back-ups.’

Careful planning was required to ensure that the best possible solution was implemented and communication was key. ‘It’s very important to communicate with the customer before the show and plan accordingly,’ Mr Huang noted. ‘Man power can be arranged equipment can be checked in the warehouse, but if the organiser or the venue require changes to be made on the fly, that can pose the biggest challenge. In such situations, the person who is in charge needs to make very quick decisions.’