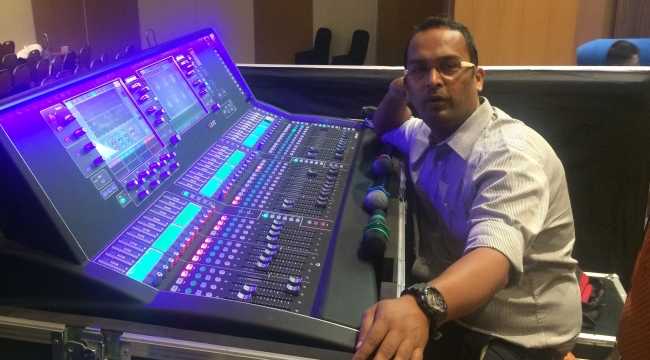 INDIA: Allen & Heath’s Indian distributor, Sun Infonet, has confirmed the sale of a dLive system to rental company Audio Core. The system comprises an S7000 surface and has been deployed at a pair of events following delivery.

One of the events was a large wedding ceremony, held at the NSCI Dome in Mumbai for the performance of local artist Sarosh Nanavaty. ‘We suggested that the artist go with the S7000 console,’ said Bijon Bhadra of Audio Core, who served as the mix engineer. ‘We had deployed L-Acoustics Arcs as the main PA with multiple delay stacks of Nexo PS15s.’

Mr Bhadra also noted that this system was powered by a mixture of Nexo, Camco and Lab.gruppen amplifiers, while vocals and music were captured by six Shure microphones. ‘The artist and the client were very happy,’ Mr Bhadra confirmed.

The S7000 was also utilised at the NSE Nesco Complex in Goregaon for Deutsche Bank’s ‘Town Hall’ event that brought together staff members from the banks offices around India and abroad. ‘Audio was running both ways for video conferencing with many dignitaries on stage,’ said Mr Bhadra. ‘The S7000 allowed us to run 128 inputs with minimal set up time.’

Sound reinforcement at this event called upon a Nexo Geo S12 system with RS18 subs as the main PA, once again supplemented by delays of PS15s. All power was via Nexo amps and a variety of Shure mics and lavaliers were used.

‘We have partnered with Deutsche Bank for the last four years,’ said Mr Bhadra. ‘The client was happy with the new dLive console and satisfied that we continue to upgrade.’