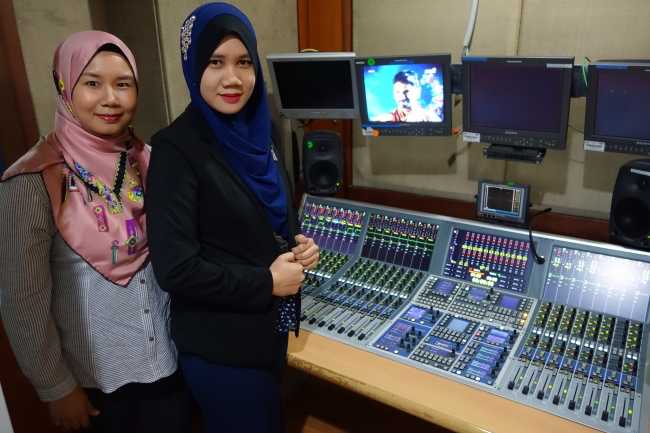 MALAYSIA: One of the earliest projects tendered for and won by Stagetec Asia at public broadcaster RTM (Radio Televisyen Malaysia) was the installation of a Stage Tec Auratus XL console back in 2004. More than 12 years later, the console, which was deployed in RTM Studio 5, has proven a reliable commodity and as such, when the broadcaster recently sought updated technology, it opted to upgrade the Auratus XL with the manufacturer’s Crescendo Platinum 4.0 firmware. Crescendo Platinum 4.0 provides users at RTM with Nexus graphics on the console’s display, additional input selection for each channel and Mosart control.

‘The Platinum series represents our most powerful consoles for live mixing and production, thus it is about time and a wise decision for Studio 5 to upgrade to platinum series,’ explained Advon Tan. ‘It will improve and ensure an effective workflow with the new channel functions and deep integration of existing Nexus audio network.’

‘It is easy for us to familiarise ourselves with the new features of Crescendo Platinum because the system stability and optimum audio quality has already been built in to integrate with Nexus architecture,’ said RTM news engineer Mrs Mashira. ‘So far, we are happy with the upgrade and we look forward using the new firmware for many years ahead.’

‘It is important for news broadcasters to be aware of the audio quality especially when the audio is being transmitted to viewers,’ noted RTM news engineer Puan Mashira. ‘Despite its compact size, we are amazed with its friendly interface, which is easy for our engineers to calibrate and technical producers monitor the audio levels thoroughly.’