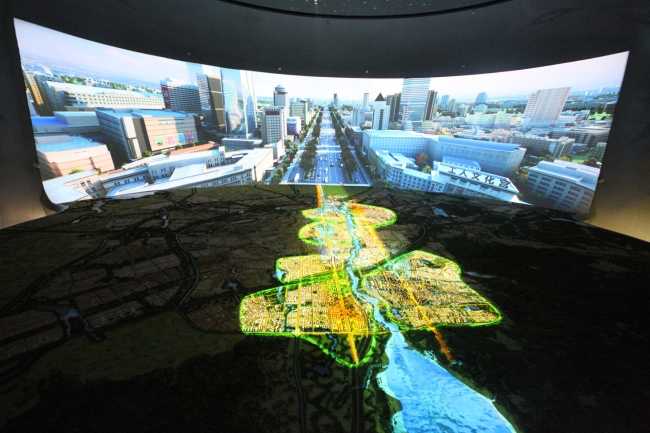 CHINA: Christie’s Chinese partner Wincomn Technologies has been exploring the past, present and future of urban planning through a multimedia projection mapping exhibit at the Chanchun City Planning Museum. Among the highlights of the exhibit were Christie’s M and Roadie Series projectors firing on a massive sand table, a curved screen and the ceiling of the exhibition room covering a total area of about 1,100m2.

The Changchun City Planning Museum is a newly-opened facility in Jilin Province offering the country’s largest exhibition zones. Comprising three floors, the turtle-shaped building showcases hundreds of plans, photographs, animated urban models and diagrams illustrating the history of Changchun’s city building and development, as well as visions for the immediate and distant future.

A total of 10 WU14K-M 3DLP are used to deliver the visuals for the massive 28m-diameter sand table, while projections arrive at the ceiling courtesy of HD14K-M 3DLP unit’s mounted within the ceiling structure. The 36m-wide, 11m-high curved screen in front of the sand table is lit using Roadie HD+35K 3DLP projectors.

‘The large-scale multimedia exhibit is a hemispherical three-dimensional space – the main attraction being the gigantic sand table projection that showcases Changchun’s intelligent urban planning process in great detail, and this is complemented by projected visuals on the massive curved screen and ceiling,’ said Tony Chen, general manager, Wincomn Technology. ‘This is a highly complex and unique sand table setup which is unprecedented in China, and we are proud to be able to deliver stunning visuals using Christie’s high performance and dependable M Series and Roadie Series projectors.’