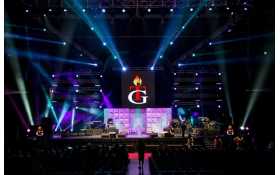 USA: For the second consecutive year, the Tabernacle of Glory church hosted the Arise and Shine Miracle Conference. The four-day programme celebrates the end of 40 days of fasting completed by the church and occupied the 8,000-seat BankUnited Center at the University of Miami. The event reportedly attracted attendees from across the US, as well as international visitors from countries including Canada, France and the Dominican Republic.

As previously reported on Pro Audio-Central, 98 Turbosound loudspeakers were deployed at the event. To power this setup, Sound Media debuted its newly purchased Powersoft X4 Amplifiers. Mr Foster’s organisation already owned amplifiers from the K Series, but with the conference taking place in such a large venue, the decision was made to expand and upgrade its inventory.

‘Like most arenas of its size, the BankUnited Center is a reverberant space, so clarity was extremely critical. Powersoft delivers the best clarity available in power amplification so I knew it would be perfect for cutting through the space and minimising unwanted reflections,’ Mr Foster explains. ‘I knew about some of the features that had been introduced in the X Series, and based on our positive experiences with the K Series we knew the X4 would be the perfect amplifier for all of our future productions.’

‘We have made use of Powersoft DSP since the K Series came out and we love the enhancements that have been put in, including new features like FIR processing,’ adds Mr Foster. ‘Having access to separate DSP for each of the four channels in each X4 made our lives so easy, and the ability to manage the routing capabilities within Armonía is also very convenient. Of course the sound quality of the equalisation and processing is excellent.’

All 18 X4 units were deployed in six racks, while the K Series amps required only four racks. ‘We really like the single rack space design of the X4, it’s very space efficient and allows us to easily rearrange the racks however we see fit for a particular event,’ enthuses Mr Foster.

The Sound Media owner continues to describe ho the X4’s ability to handle single phase, bi-phase or three-phase power is a particularly useful feature. ‘It really simplifies everything because we can get the amplifiers to run equally well on whatever type of power is readily available, or across multiple power types as may be the case in a larger venue. Plus, Powersoft amplifiers are very efficient and always feature very low overall power draw, so they really perform anywhere we take them.’